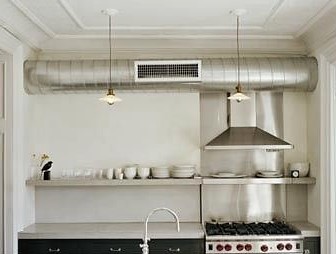 Exposed spiral ductwork as a design element has been on the rise for more than a decade and shows no sign of slowing down. Once seen primarily in restaurants, offices, and other open-concept commercial spaces, exposed ductwork is gaining popularity in the residential market as well, playing an integral part in today’s interior design. The streamlined, utilitarian appearance of exposed spiral duct, both painted and unpainted, lends itself to a variety of styles that include industrial, contemporary, minimalist,  modern/rustic, and more. It is an ideal choice for homes and buildings where space is at a premium.

Beyond its appealing aesthetic, exposed ductwork offers numerous benefits over traditional, concealed, rectangular duct systems. First, air leakage is virtually eliminated in spiral duct, resulting in less wasted energy and better indoor air quality. Air flows more evenly and efficiently, with minimal breakout noise. Running ductwork within a conditioned space, rather than through an attic or crawl space, is an effective energy-saver as well. Finally, installation of exposed spiral duct can cost as much as 50% less than traditional ductwork, with substantial savings on materials and ease of installation, just to name a few.

The Importance Of Workshop Ventilation In Winter